The PBJ is back in the home hangars following an outstanding 13 day barnstorming tour culminating in participation in the 75th Anniversary of the Doolittle Raid Commemoration at the National Museum of the US Air Force in Dayton, Ohio. The debut tour for the PBJ included stops in New Mexico, Kansas, Ohio, Arkansas and Texas, to eager crowds for aircraft tours and rides.
We are thrilled to report that the aircraft performed impeccably and the reception of the host organizations and enthusiasm of the public far surpassed any expectations. Col. Cole accepting a PBJ Patch from the crew Group photo of all participating B25 crewsThe following short video serves as the highlight of the main event at the NMUSAF in Dayton.

This playlist contains videos of the veterans we met during the tour:

We would like to extend a heartfelt thank you to our supporters who followed us on this epic journey and offered their encouragement and praise to a tired crew on the various social media platforms.

Images from tour stop locations, Gathering of Mitchells at Grimes Field and the Doolittle Commemoration assembly and flyover at the National Museum of the US Air Force in Dayton, Ohio. 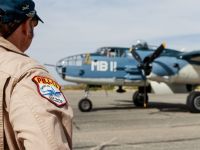