The mass formation was the largest fly-over for a Veterans Day parade anywhere in the United States and included a P-51 Mustang, multiple T-34’s, Nanchang’s, Yaks, a C47 and our very own B-25 PBJ and Executive Sweet of the AAF.

Launch and recovery of all these aircraft from the Camarillo airport made for an especially exciting day at the museum. 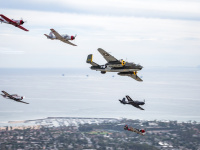 A compilation video from Don Ramm of the T34s and our SNJ doing some join up and formation practice. – Thanks for sharing!

And a compilation video of T34s of the Mentors West group in formation for the flyover of the Santa Barbara Veterans Day Parade, November 12, 2016. Video by Don Ramm

Further photos and videos will be added to this news posting as they become available.